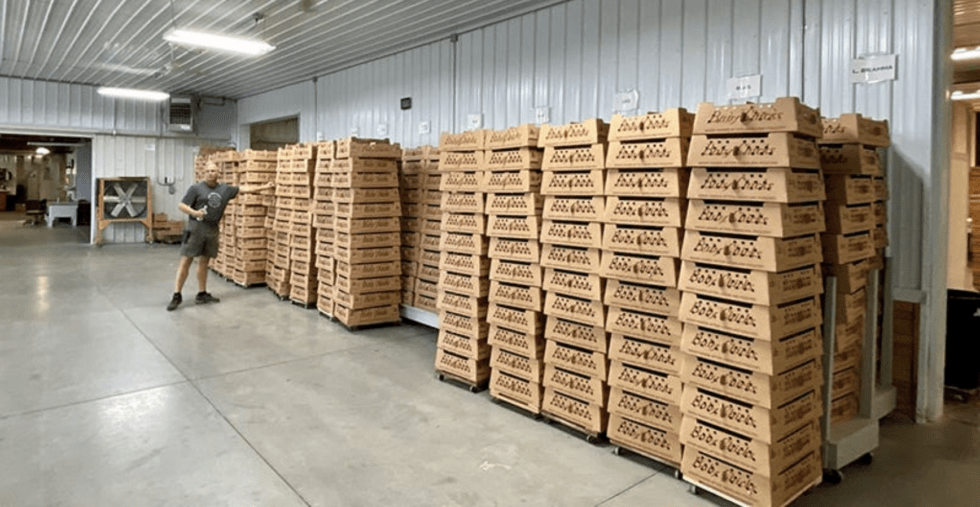 It happened in 2008, following the Great Recession, and it’s happening again in 2020, following the COVID-19 pandemic. Since March, retail sales are up 400%, and phones continue to ring into September when March is the Zeeland hatchery’s busiest season.

This, while many sectors of the ag economy struggle.

“We're always busy in March, but once COVID-19 hit and the schools closed down, our phones just started ringing constantly,” said John Geerlings, president of Townline Poultry, a fourth-generation farm that raises 40,000 hens.

“We were getting 50 to 100 orders a day just from individuals looking for chicks.”

As one of Michigan’s few mail-ordering chicks businesses, Townline Poultry produces eggs that are put into incubators and hatch as baby chicks. The business packages the chicks into cardboard boxes before the post office picks them up. The chicks are then delivered to customers.

“I was very, very scared when this COVID thing started because I didn't know if the post office was going to deliver chicks, and if they didn't, I had no way of getting the customers their birds,” Geerlings told Michigan Farm News. “I had no idea if the farm stores were going to be open … so it was a very scary time for a couple of weeks.”

But then business took off, especially at the retail side of things: Geerlings said year-over-year growth of the company sits at roughly 70%.

“We kept saying if we can just get a few weeks in, maybe we can break even for the year, and by the time we hit like week three, our phones started ringing off the hook,” he said. “We went from not knowing if we're going to hatch next week to is it ever going to end.”

While wholesale customers — like Tractor Supply Co. and Family Farm and Home, to name a few — make up 85% of sales at Townline Poultry, the business experienced more demand at the retail level.

“People would go to their local farm store, whether it was Tractor Supply or Family Farm and Home, and the demand for chicks was so high that those stores were sold out, so they started calling us directly,” Geerlings said. “People found out that it's a great tool to educate people. For kids it's a great project. You get the baby chicks, you learn animal husbandry, and you get to see the chicks grow.

“It's kind of like having a garden — that's moving around.”

“Townline has a unique niche that depends on neither, but speaks to people's desire to raise their own food,” said Brink, executive director of MAPI, a statewide trade organization. “The Townline team has really stepped up, increasing their production far into the summer months to meet consumer demand, and their hard work is paying off with a successful year and happy, educated customers across the U.S.”

When Kaydee Geerlings thinks of business in 2020, she recalls 2008, the last time the economy faced a financial threat this large.

“COVID hit when we were already kind of at our busy season, so we were ramping up,” said Kaydee Geerlings, executive coordinator of Townline Poultry. “That part was fairly similar, except for when everything did get shut down, it felt like almost overnight, our sales tripled. Our phones were ringing off the hook. Our online orders were pouring in faster than we could even grab them from the printer.

“I can't say we were totally prepared for that surge of demand in the office, but we adapted very quickly and got some additional staff in so that we could make sure all of our customers were being taken care of.”

Kaydee Geerlings contributed the farm’s success to more people staying at home during COVID-19. They’re “thinking about other ways that they can pass the time, make money, save money, make sure their family is going to be fed,” she said.

“My only personal experience with something like this happening was the years around 2008,” Kaydee Geerlings added. “For a few years, chick demand steadily increased. Our farm grew quite a bit during those years, but it wasn't quite so much all at once.

“Indirectly, stories passed down from my great grandfather that during the Great Depression, chick sales did well enough that the house across the street — that is not in our family anymore — he had built and paid cash for it.”

“I would say the Post Office does generally a good job,” he said. “Now and then, things do get bottled up, and it becomes a chore to find out why that is. It isn't sometimes our Post Office or Grand Rapids Post Office. It could be the Post Office in New York. It's a hard tracking job. We do have tracking numbers on the packages, but we did the research, and I would say this year our problem shipping was no greater than the year before on a percentage basis.”

According to John Geerlings, Townline Poultry inserts a heat pack for the chicks on cold days and a gel nutrition pack for longer journeys.

“I can't complain about the postal service, though, because they're the only game in town when it comes to delivering baby chicks,” he said.