Turkey operations pull use of antibiotics 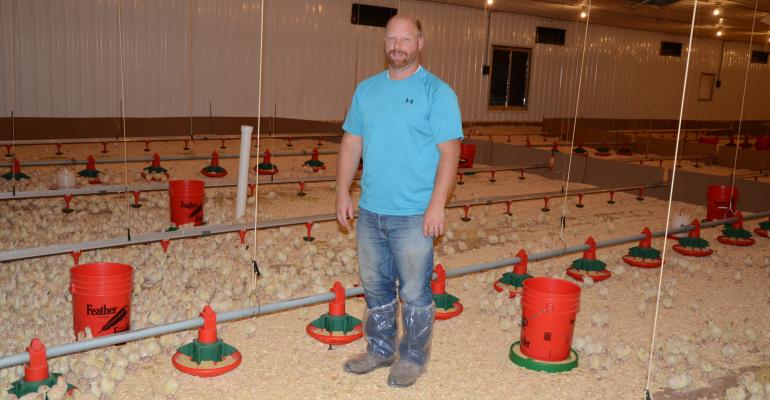 Consumer demand has prompted a shift in production practices.

The whole turkey bird may be the star of the holiday feast, but there’s also plenty of demand for other turkey products — such as turkey breast roasts, deli breast meats, turkey breakfast sausages, ground turkey, drumsticks and more. All are produced at the Michigan Turkey Producers Cooperative, with 17 family farm members independently operating 53 farm sites across the state.At Four D Farms in Carson City, Mich., general manager Caleb Duflo is overseeing the production of 375,000 to 400,000 tom turkeys per year in five locations — four within the Carson City and Sumner area, and the other being about 55 miles west in Howard City.The cooperative ensures he has a market, but it doesn’t mean he should expect status quo. In the past three years, production protocols have changed, responding to retailer and consumer demand for birds raised without antibiotics.One of the co-op’s largest customers, Costco, asked the co-op to have growers transition to No Antibiotic Ever (NAE) from hatch to harvest. The co-op also sells to Gordon Food Service and to numerous independent grocers and restaurants across Michigan and the Midwest — including Firehouse Subs, Bob Evans, Cheesecake Factory, California Pizza Kitchen, Zoup! and Hungry Howies.Traditionally, farmers often added low doses of the antibiotics to animal feed to protect birds from disease as growing units increased in numbers. Strict withdrawal timelines ensured traces of all antibiotics were eliminated before processing.“The biggest change we made to get to NAE was installing water filtration systems,” Duflo says. “A bird consumes more water than anything. So beforehand, with the antibiotic variation in the feed, it wasn’t as big of an issue because the antibiotics helped with that. So now that we don’t have that card, we have to put a whole new emphasis on clean lines bringing in clean water to the barns.”Air-quality monitors also help, combined with getting employees to pay a lot more attention to what's going on in the barns.“We had to lift management to a higher level,” Duflo says. “That means monitoring the birds more closely and noting if the birds are a little noisy, the barn is stuffy, birds are huddled together or just acting off. … All of that needs to be reported, and we need to keep an eye on it.”Duflo says he’s had pretty good luck with his regiment of adding a direct-fed microbial (DFM) in place of the antibiotic. “Some growers are using oregano, but we use a product called Novella, which is really just feeding them good bacteria to fight the bad bacteria,” he explains. What’s best for the birds Because life is far from an exact science, dire circumstances can force a decision. “As a farmer, my No. 1 priority is to do what's best for the bird,” Duflo says. “If it gets to the point where it's the difference between using an antibiotic to bring a flock back to good health or watching them die, we will still treat birds if needed.”The treated flock is then separated, transported separately and processed separately. Only three or four flocks from Four D Farms have needed treatment in the past five years.Michigan Turkey CEO Brian Boerigter says, “Because our farms already place such a huge emphasis on bird care and bird health, and a lot of flocks were already being raised without antibiotics, the changes were able to happen quite smoothly. We also had to make sure all NAE flocks were run first on clean equipment to ensure no cross-contamination and good segregation of all NAE product throughout processing.”

The cooperative, located in Grand Rapids, is processing about 185 million pounds annually, with 65% of it being NAE product. Initially operating in the commodity market in 1998, Michigan Turkey moved into the value-added market with the opening of its cooking plant in 2006.Across the board, Duflo says technology has helped in every aspect of growing turkeys, whether it be with controllers, ventilation systems or dramatically improved drinker lines.“Genetics have also improved, and feed diets are very proficient and science-based,” says Duflo, who also notes management is less labor intensive than 15 years ago. “Years ago, as a kid, we were happy to grow a 32- to 33-pound turkey. Today, if we’re not at 40 to 41 pounds, we’re not very happy.”

With the Michigan turkey industry geared toward wholesale and restaurants, COVID-19 provided a substantial punch to turkey consumption, sales and the food chain.“We ended up storing a lot more frozen product during that time,” Boerigter says. “Our Michigan turkey farmers are extremely generous, so we ended up donating more than 30,000 pounds of turkey to food banks like Feeding America West Michigan.”Allison Brink, executive director of Michigan Allied Poultry Industries, says, "COVID caused massive market disruptions for many of our Michigan family farms, but they continue to work every day to take the best possible care of their animals to ensure a steady supply of healthy protein for grocery stores and restaurants."While the market has started to steady itself, farm owners took price cuts on themselves to make it through the shutdowns. Some reduced incoming flock size. “They were not thriving, but surviving,” Brink says.During the COVID-19 shutdowns, with some employees out at the processing plant, it caused occasional backlog on delivery.“Typically, we raise turkeys out to 19 weeks of age, but there was a month or two last year when we got up to 20 to 21 weeks of age,” Duflo says. “That’s not really a problem, except it gave us — we have eight workers — less time to get barns clean. Everyone had to work a bit harder to quickly get things turned around and ready for the next group of birds.”

Since 1990, the Duflo family has been building a sow and turkey enterprise. It started with Darwin and Phyliss Duflo. The farm’s growth allowed their three sons — Kelvin, Kim (Caleb’s dad) and Kris — who all had off-farm jobs, to return in a staggered fashion to farm full time.The family later added hog production, finishing about 150,000 hogs a year, and bought an elevator. After a short stint in college, Caleb returned to the farm in 2005 and built a nursery hog barn. He also worked in one of the sow barns. About six years ago, the sow operations were sold and then the elevator.“Turkeys have always been my thing,” Caleb says. “Kris turns 60 this year, Kim is 69, and Kelvin is 72. What it really came down to was my heart was in turkeys,” he says. Beside’s Kelvin’s son, Nathan, who runs one turkey facility, Caleb is the only Duflo active on the farm. As the general manager, he says he was focused on getting everything down to a manageable size of operation.Last fall, a feed mill was added to the farm’s portfolio. It supplies mash feed for the entire operation, cutting the freight bill from pellets being shipped from the west side of the state.“We’re saving manufacturing and freight cost,” Duflo says. “Some people will tell you it takes more mash feed to put on the same amount of weight as it does if they are eating pellets, but we have not seen that.”“Our five-year plan is really to make our business the most self-sufficient as we possibly can, and grow in that aspect.”